Breaking News
Home / Featured / A Soofi in the Brothel

A Soofi in the Brothel

As per the various estimates, there are three to 15 million prostitutes in our country. Some live and operate from marked red light areas in different cities and towns. Some villages and communities also practice this ‘profession’ or ‘dhandha’, as it is colloquially referred.

These areas are the part of the civilization’s underbelly. They trouble us, make us uncomfortable, and also incite our curiosity. So, we have numerous legends, stories, books, songs and films about prostitutes. From being Vish Kanya to Devdasi to Tawaif, and from Randi and Rakhail to Call Girl and Escort- the prostitute has traveled a vast journey through our histories.

Mayank Austen Soofi’s Nobody Can Love You More: Life in Delhi’s Red Light District provides us a glimpse of contemporary scenario of ‘infamous’ GB Road in Delhi and tries to sketch out the shadowy life patterns inside the red light area through words and images.In the process, he also touches some threads of the past. He keeps one of Manto’s stories, The Black Salwar, as a talisman whenever he visits the area.

He meets RV Smith, who has chronicled Delhi for so long and was a regular at GB Road some decades ago. Soofi talks to MA Khan, a descendant of an old noble family and lives in a nearby locality. He also visits shopkeepers in the area and pimps operating there. Along with the inhabitants of kotha no. 300, whom Soofi calls ‘family’, other conversations open a huge canvas before the reader. And, Soofi, the narrator, present everywhere in the narrative, is us who witness those dark stairs, alleys and chambers through the eyes of the author.

Despite presenting an honest and panoramic view of the inside, he does not claim to tell the ultimate truth. He writes, ‘In these three years in GB Road, have I recorded the truth?… May be it is better this way. It is fulfilling enough for a writer to get a sense of GB Road without stripping bare the lives of its people.’ In his Kothagoi, that records the present and the past of a red light area in a Bihar town, Prabhat Ranjan has categorically declared, ‘whatever is written in this book is all lie.’ Veteran journalist Ravish Kumar says in one of his reports which subject is GB Road, ‘Here everyone has uncounted stories. I don’t know what I saw peeping into their lives and what I could show you.’

Sabir Bhai, a kotha malik, tells the author, ‘Come on, Soofi Bhai, you can’t trust anybody in GB Road.’ And he also refuses to share his own past. Soofi is perplexed, ‘Could it be they cherish the secrecy because there is no secrecy about their bodies?’ He echoes what Ravish says in his report, ‘Their life stories, especially when they focus on why they became sex workers, are almost identical. But there is something in each woman that makes her distinct.’ He expresses his frustration over his inability to grasp the whole personalities of those women.

Professor Kumkum Sangari in her book, Politics of the Possible: Essays in Gender, History, Narratives, Colonial English, underlines that the prostitute who, like the higher caste widow, signifies the failures of familial protection. She asserts that ‘prostitution’ operates ‘as a class ascription’ and has been raised ‘in binary opposition to middle-class Hindu domesticity and married respectability.’ In Soofi’s narrative, everyone wants to get out of GB Road, and aspires for a life in ‘society’. ‘I surely do not want to breathe my last here’, says Sabir Bhai.

In fact, even an outsider would not want dying in GB Road. In jest, Soofi points to this irony. One night he is followed by some ‘pimps’. He thinks about all those warning about the bad boys on the street. He thinks, ‘What if I’m killed in a fight? To die in GB Road! My poor parents.’ Sabir’s kids have dreams to get out and live elsewhere. But it is not that easy. Sabir says, ‘Once you get into a red light area, it is very difficult to get out.’

And when someone from GB Road gets out, their identities are altered. Sabir’s son Osman tells Soofi that when asked about his residence, he tells that he lives in a different area, and he does not invite his friends. In Ravish’s report, a person tells that his daughter’s in-laws asked him not to mention GB Road on the wedding card. Prabhat Ranjan’s Manorama comes inside Chaturbhuj Sthan as Suman. Champa goes out as Rajni in BR Chopra’s Sadhna. Soofi’s Sushma is also Shireen, or, perhaps, both are fictitious.

The names and the religions of those people are not that important. They can identify themselves with any name, and they can pray to any god or all gods. What matters most in a red light area is the body. A prostitute’s entire being is centered in the location of her body. It is the body which is rejected and accepted every time. ‘Sushma must get a customer.’

Sushma, Roopa, Nighat… are worried about their bodies and they do not want to age like Sumaira for a life beyond 35-40 is horrible in a red light area. Nobody wants to be in the trade, others also want these kothas to go, society at large does not care or dislike them. But ‘dhandha’ has to continue. As some local lad tells Soofi, ‘Duniya khatam ho jayegi/Chudai nahin hogi…‘ I am reminded of some woman from a kotha telling me, ‘Dilli mein khudai aur chudai hamesha chalti rahegi.’ I was volunteering at GB Road at that time and had asked her if this profession would end forever in future.

Mayank Austen Soofi is a flaneur. But it is not that easy to get into a brothel to record stories or just hang around with those people. Sabir Bhai’s kotha becomes familiar for the author because he invests time and trust. In return, he also gets them. He is not that welcome elsewhere, but through those brief encounters he brings out a vivid landscape of GB Road.

At times, his humour is brilliant. Smith tells about his adventures in GB Road that out of 45 women in his life, 20 were from GB Road. Soofi writes, ‘I pour more beer into Smith’s mug.’ After another episode, he orders another bottle. Through a vast collage of simple and focused conversations, we get into GB Road from almost every angle. Perhaps, the customer is only one not participating in the conversation.

Read this book. It will open a window to that area which you perhaps never know. It tells us that those women, maliks, pimps, wards are human beings with simple desires and wants. The book also shows a mirror to the ‘civilization’ or the ‘society’. Sabir Bhai is collecting all those news clips that report about the sex trade and raids in various parts of the city.

Soofi notes, ‘Gone are the days when a city needed to have a separate red light district. Massage parlours, beauty salons and friendship clubs offering sex on the pretext of other services have opened across Delhi. The red light has gone out into the city. GB Road has been left behind.’ The internet revolution is full on. We have numerous dating sites along with social media where singles and married men and women are openly seeking and offering sex, at times on the pretext of ‘love’.

How long Sushmas of the GB Road will get customers? Will this place will also be a past like Chawri Bazar soon? 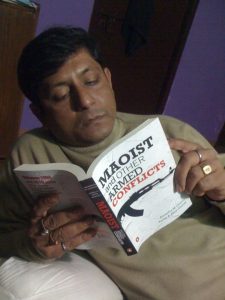