Breaking News
Home / Featured / What is the acceptable amount of blood for good literature?

What is the acceptable amount of blood for good literature?

Ashutosh Bhardwaj is a senior reporter and writer and writes regularly on books in financial express. Today he writes on Arundhati Roy’s much talked about novel ‘The Ministry Of Utmost Happiness.’

Twenty years on, Arundhati Roy returns with a novel that yearns for an artistic insight, and some broken glasses

In one instance in her new novel The Ministry of Utmost Happiness, Arundhati Roy asks: “What is the acceptable amount of blood for good literature?” It’s obviously rhetorical, for top works are possible with gallons and without a drop of blood. The inverse question rather goes: How much spatial and temporal remove an author needs for good literature?
Writing a novel on incidents that regularly find prominent space in newspapers comes with a major creative challenge. Unless the writer imbues the text with supreme artistic insight, the narrative might read like a mere rehash of media reports readers are sufficiently familiar with.

Roy’s novel has two parallel sequences, and corresponding problematics. A Kashmir story told through a Malayali-Christian woman and three men who loved her in varying degrees and in different phases of life. They meet her during their college days in Delhi in 1980s, before one becomes a journalist, another a militant and the third an officer in the intelligence department. All the four eventually cross their paths in Kashmir over a decade later, and define the narrative that stretches to the present day.

The second sequence is about a group of eunuchs, who make a graveyard in Delhi their home and become witness to incidents like the Jantar Mantar protests and 2002 Gujarat riots. Here the novel falters the most, as the heart of the novel and of the novelist lies in Kashmir.

Like a true activist, Roy, the novelist, believes in delivering unambiguous moral messages. There is no space for any nuance or distinction as the entire political spectrum of the country receives absolute disdain. So you get a “lisping-Poet Prime Minister”, a “Trapped Rabbit PM”, “Gujarat ka Lalla”, one Mr Aggrawal, who, having worked with the “revenue department”, later becomes the “chief lieutenant” of a “tubby Gandhian”, the leader of the Jantar Mantar protest.

These adjectives (readers are fairly familiar with them), true as they might be in their spirit, are thrown in without context, evoking little creative anxiety. Such is the desire to accommodate political content and current events that in the last pages, Roy even brings in a woman Maoist from Dandakaranya.

Of course, anything and everything is possible in the pages of a novel, provided it is illuminated by artistic wisdom. A political novel requires an introspective gaze to ensure it remains an artistic statement, and is not reduced to a pamphlet. A political statement can often be monochromatic, denying the essential polyphonic character of the novel.
The immediate is often tempting, but art lives for posterity. Published in 1942, The Outsider does not have a single reference to the ongoing war that devastated the body and soul of Europe. The Trial wanders in the realm of an imaginative allegory. Yet, both are the representative political and moral comments on the continent.

Not that the description of immediate incidents or political concerns necessarily weakens a novel. Yashpal’s Jhootha Sach (translated in English as This is Not That Dawn), Manto’s stories and Bhishm Sahani’s Tamas are necessary readings on partition. Milan Kundera weaves several of his marvelous works around the Soviet occupation of his country.
Roy’s novel offers little creative justification for inserting in the details that border newspaper clippings.
Yet, the novel, to some extent, redeems itself in Kashmir, incidentally when the writer delves into personal lives and sufferings of her characters. One such episode is the quietly smouldering bond between Tilottama and Musa Yeswi (student-turned militant), where they fit in like the “pieces of an unsolved (and perhaps unsolvable) puzzle — the smoke of her into the solidness of him, the solitariness of her into the gathering of him, the strangeness of her into the straightforwardness of him”. The description of their slowly burning lives is a delight. Their night of togetherness in a houseboat in Kashmir, as she meets him after years, “was less lovemaking than lament”.

Another gem is the introspective monologue of Biplab, who, leaving behind his treacherous years as an IB officer, is now planning a music channel with Nagaraj (the journalist). These four lives are conjoined by a chain of events that read like a spy thriller, on occasions interjected by marvelous observations. Among the choicest is about the “promiscuous nightmares” in Kashmir. “They were unfaithful to their owners, they cartwheeled wantonly into other people’s dreams, they acknowledged no precincts, they were the greatest ambush artists of all. No fortification, no fence-building could keep them in check. In Kashmir the only thing to do with nightmares was to embrace them like old friends and manage them like old enemies.”

Besides Bastar and the north-east, Kashmir is the biggest question before the Indian state. It’s a wound of generations, nourished by the apathy of the state that believes that all solutions flow from the barrel of the gun.

Towards the end, the novel has a poignant conversation between Biplab and Musa, who makes a chilling prophecy that the Indian “Occupation” (Roy USES capital O) of Kashmir will ensure that “one day Kashmir will make India self-destruct”. “Maybe I had no idea how suicidal Kashmiris were prepared to be,” Biplab quietly introspects.

If Roy had limited her work to Kashmir, avoiding the insertion of a variety of excesses of the Indian state (she throws in even the Una incident of July 2016. Seemingly, a last-minute inclusion), it would have been a bigger work. Both as an artistic and a political statement. Her commitment to human values would still have remained unflinching if she had avoided the hurried reference to incidents like lynch mobs and cow slaughter, or given them the creative space they deserved. Her questions are legitimate, but sometimes get lost in the loudness of the narrative.

A novelist’s forte is in illuminating those segments of life that have remained beyond the popular vision. Roy offers few such sequences, including the one when Tilottama posts the poem of Russian poet Osip Mandelstam to an owl — “Who can know from the word goodbye what kind of parting is in store for us”.

Hindi writer Nirmal Verma wrote that “a good novelist distributes his sympathy equally to his characters, whereas a great novelist struggles against this sympathy”. When love goes blind, we are well aware, even the greatest lovers become susceptible to errors of both judgment and character. Similarly, when sympathies blind a novelist, the outcome may well be imagined. Kundera deeply detested the communist regime, but he was not sympathetic to the regime’s victim Ludvik (The Joke).

One way to assess Roy’s Kashmir novel is by asking this simple question: To what extent does its 438 pages enhance our understanding and vision about India’s northernmost state?
Before attempting the answer, one can turn over to the conversations Tilottama had with her mother, dying in an ICU. The old woman, losing coherency and senses, dictates notes to her daughter — A great war has started between me and the butterflies.

Sometimes, especially in a novel, you only have to capture blood on the wings of butterflies and they are sufficient to tell you the gore an entire war has witnessed. After all, a Russian master told us that moonlight can be best described when you show not the sky and the white ring, but the reflection of falling silver rays through the broken glasses of a green bottle. 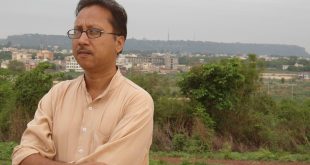